How can we help you today?

Why can't I see the answers in Word Wheel?

In our printed Word Wheel puzzle, we only ever publish the 9-letter word and a selection of possible shorter words as a "solution". The challenge remains open-ended: how many words can you find?

The Word Wheel app has also been designed to be as open-ended as possible.  You carry on scoring points for as long as you can keep making words!  The online leaderboards give you an indication of how well you are doing compared to other players but we do not reveal a total number of words to find, or what we think a definitive solution to the puzzle is.

That's because we don't believe it's possible to give a fair final answer for these puzzles.

While it's true that there are only a finite number of words that can be made from any wheel, and that the app knows what all these words are (otherwise it would not be able to tell you whether a word was correct or not), many of the words that would be accepted are obscure, colloquial, antiquated or words of a particular dialect.  A large number of these are words we simply wouldn't expect players to find.

We did not think it was appropriate to pass judgement on which words you should actually be able to find in order to "complete" a game.  The following examples are taken from the first puzzle in the app: 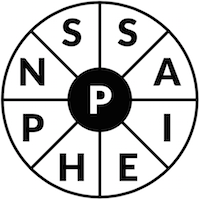 If you found the word "neap" (a type of tide), you'd be upset if we had considered it too obscure to be counted as a word in this game and did not score any points for it.

On the other hand, if we insisted that "shippen" (which means "cow-shed" in Yorkshire dialect) was a word you needed to find to score full marks, you might get annoyed that we expected you to know such an uncommon word.

Proper nouns are permitted, so "Nipha" (a mountain in Antarctica) and "Spahi" (in history, a light cavalry regiment of the French army) are accepted.  If you already found them, you're doing better than 99% of players, and that's why we use online leaderboard to indicate how well you're doing.

Rather than stating that you found, say, 82% of all possible words (many top ten scores are not this high), we show how many points other real players have achieved.  If nobody has ever found "Spahn" (a location in California where many Western movies were filmed), the top score won't include points for it.  Or if they did, perhaps you could make up the shortfall in points by finding "pheni" (a dessert from India) instead.

It is, of course, possible that our dictionary does not include some words that you just know are correct.  If so, we apologise - but let us know so we can update it!

Did you find it helpful? Yes No

Send feedback
Sorry we couldn't be helpful. Help us improve this article with your feedback.